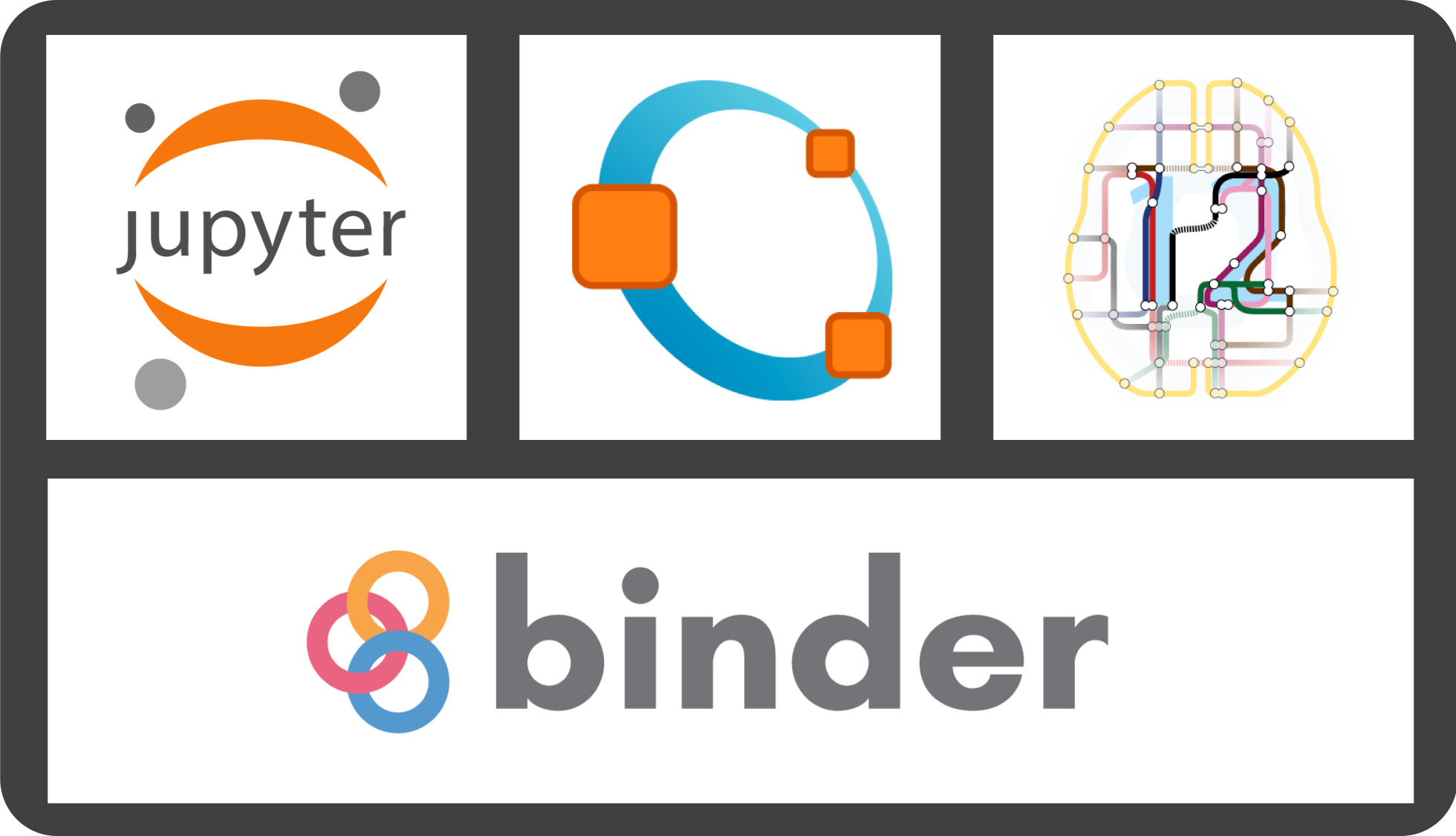 I previously shared a post about setting up a reproducible environment for fMRI analysis with Code Ocean. In this post I’ll cover how you can do the same with a framework of free and open source services, which rests mainly on Binder.

If you don’t want to do all of the background reading, here are the TLDR links:

Since starting my journey with Python and the wider ecosystem of open source tools and practices in neuroimaging, I’ve been using Jupyter notebooks and Binder regularly. And it’s great! It’s such an easy way (after the initial setup) to allow others to run your exact analysis on the same data using the exact same code and software/library versions. With the traditional idea of a journal articles and the accompanying archaic publishing system needing a complete overhaul (viva la revolución \:D/), the combination of Jupyter and Binder gets us a long way towards sharing open, reproducible and future-aware scientific content. I love how this illustration by Juliette Taka captures the core of what I’m trying to get at: 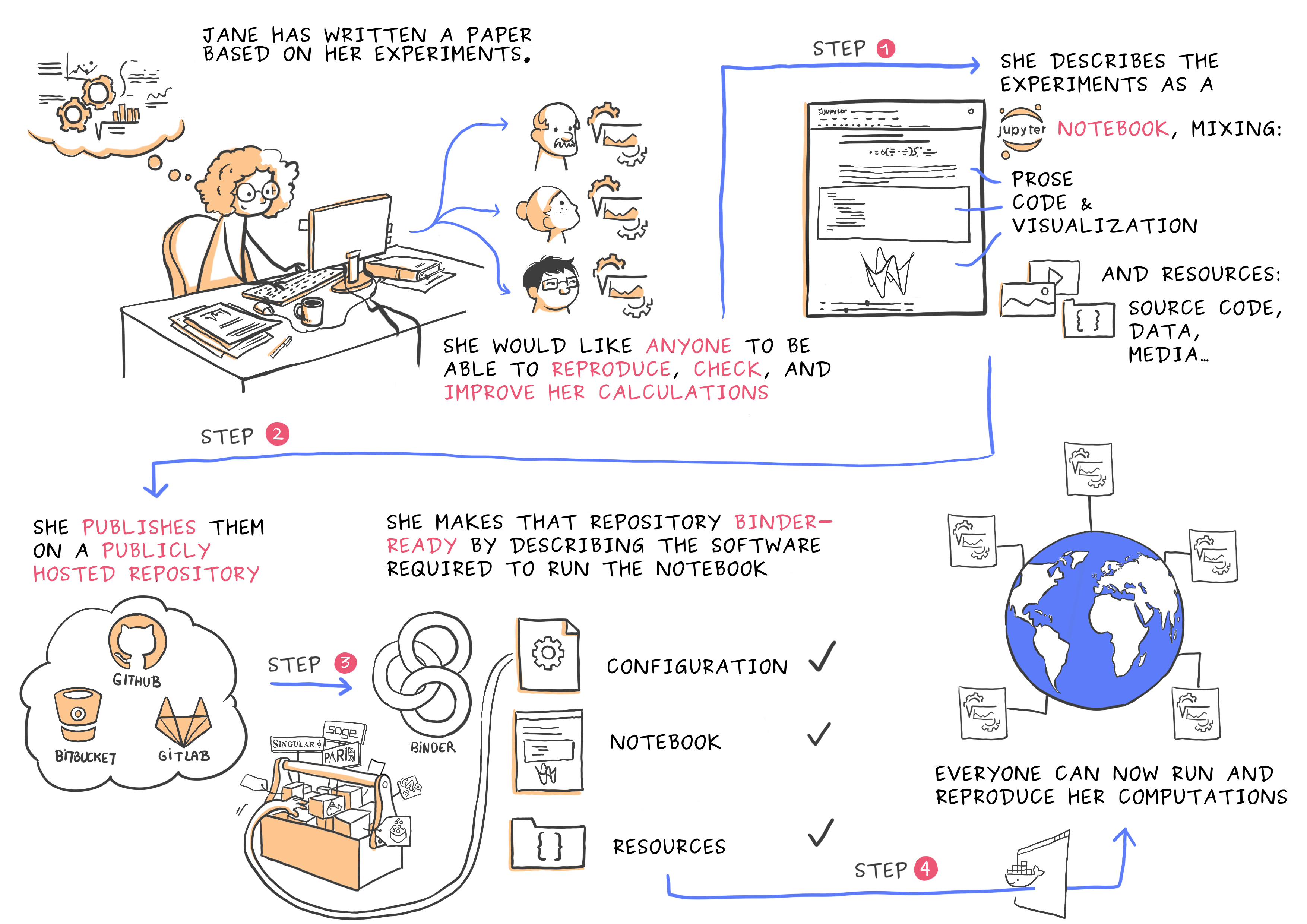 Another great aspect is the fact that it’s free (gratis): you can use most of these Python-related resources without paying a license fee. As die-hard open so(u)rcerers (yes, that expression exists now) will point out, this is not the case for Matlab. And neither, one might think, for Matlab libraries that depend on you having a Matlab license. However, with the combination of Matlab libraries (like SPM12), an Octave kernel, Jupyter notebooks and Binder, this is indeed possible. You can share a fully reproducible environment with Matlab-turned-Octave code for free.

In this post I will run through the basics of setting up this framework to run reproducible, single-subject fMRI analysis using SPM12. I’ll start with short overviews of the main components, highlighting their specific roles in the overall framework. Then I’ll explain how to put them together until you have a fully reproducible environment in the cloud.

exists to develop open-source software, open-standards, and services for interactive computing across dozens of programming languages

The Jupyter notebook has become almost ubiquitous in some (probably mostly computation- and Python-heavy) scientific sub-fields. It allows the interactive development and rendering of formatted text (using Markdown), equations, code (with support for multiple languages), script outputs, user inputs, interactive widgets, and more - all in a single browser-based document. It is just… * chef’s kiss *

To install Jupyter notebook on your workstation, you will need a locally installed and compatible Python version. Installation instructions will vary based on your experience and local operating system. Common advice is to install Anaconda Distribution, which contains Python, Jupyter notebook, and many other packages.

I have a Mac and use conda (via miniconda3) for virtual environment management. I create a new conda environment for each new project, and then I use pip inside the environment to install the required packages. I don’t know if this is recommended or warned against by the wizards, but it works well for my workflow. With such a setup, this is how I would typically create a Jupyter notebook:

Now you can write fancy equations and run python code in a local Jupyter notebook. Yay!

Now, say you want to run Matlab code, e.g. fMRI analysis scripts using SPM12, instead of Python code in your Jupyter notebook, is this still possible? Indeed, using Octave and an Octave kernel for Jupyter, it is possible.

GNU Octave is a high-level, open source programming language that is mostly compatible with Matlab. Matlab scripts and functions often have drop-in compatibility with Octave, meaning you can typically (with exceptions) run your Matlab-developed code in an Octave environment.

To run a local Octave-based Jupyter notebook, you will have to install GNU Octave first. After this, you will need to install this Octave kernel in your Python environment (the same one in which Jupyter is installed). According to their instructions, either pip or conda can be used to install this kernel.

SPM12 is a free and open source software package used in the statistical analysis of brain imaging data. The SPM12 Wiki states that:

Whilst the majority of the code is implemented as standard MATLAB M-files, SPM also uses external MEX files, written in C, to perform some of the more computationally intensive operations. Pre-compiled binaries of these external C-MEX routines are provided for several platforms and correspond to files with extensions .mexwin32, .mexwin64, .mexglx, .mexa64, .mexmac, .mexmaci, .mexmaci64, .mexsol, .mexs64.

This is important to mention, since the correct MEX files have to be compiled when using SPM12 with Octave.

To run SPM12 locally, download and installation instructions should be followed, after which the following completes the setup for use with Octave (see detailed instructions here):

I’ve written many SPM12 and Matlab based scripts and functions to preprocess and analyse functional neuroimaging data, and have been looking for a way to share this in a reproducible format (apart from static code shared via GitHub). I’ve shared some tutorials before, but it would be so much better to allow readers to interact with the code as they read through the tutorial. This lead me to the setup that I describe below.

Turn[s] a Git repo into a collection of interactive notebooks. Have a repository full of Jupyter notebooks? With Binder, open those notebooks in an executable environment, making your code immediately reproducible by anyone, anywhere.

The core of how Binder works is explained well with this awesome illustration: 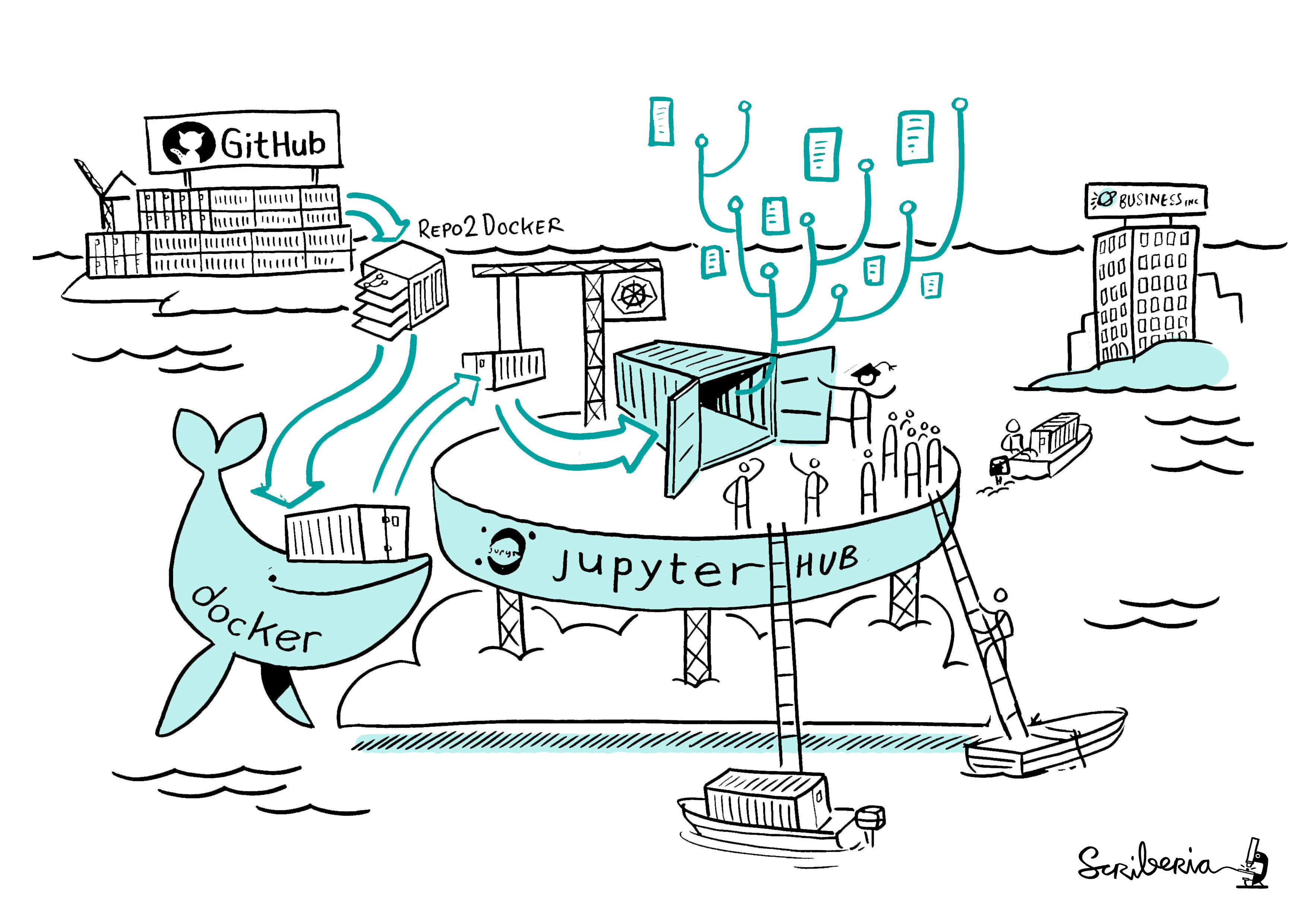 How does Binder work? Image created by Scriberia for The Turing Way community and used under a CC-BY licence. Zenodo record.

The main steps of Binder include:

A much more accurate account of these steps is provided in the Binder documentation. Other useful resources include:

Setting it all up

Here it is, Your Moment of Zen: https://github.com/jsheunis/spm12-octave-jupyter.

This repository contains what I would say is a minimum necessary setup for a reproducible SPM12, Octave and Jupyter environment. It is not perfect, it might contain bugs or inefficiencies, and it still needs improvements. But you can run code that I created, in a reproducible environment, in the cloud, without any effort.

I was inspired to set up this repository in part by the one Guillaume Flandin at UCL created for SPM12, which was probably inspired by the repository example from Binder, for which the notebook was in turn based on that from the Octave kernel repository. Open science in action…

Step by step, this is how to do it:

It should be public so that Binder can discover it. You can include README and LICENSE files for good measure.

This is what my repo looks like after including all of the files described below: 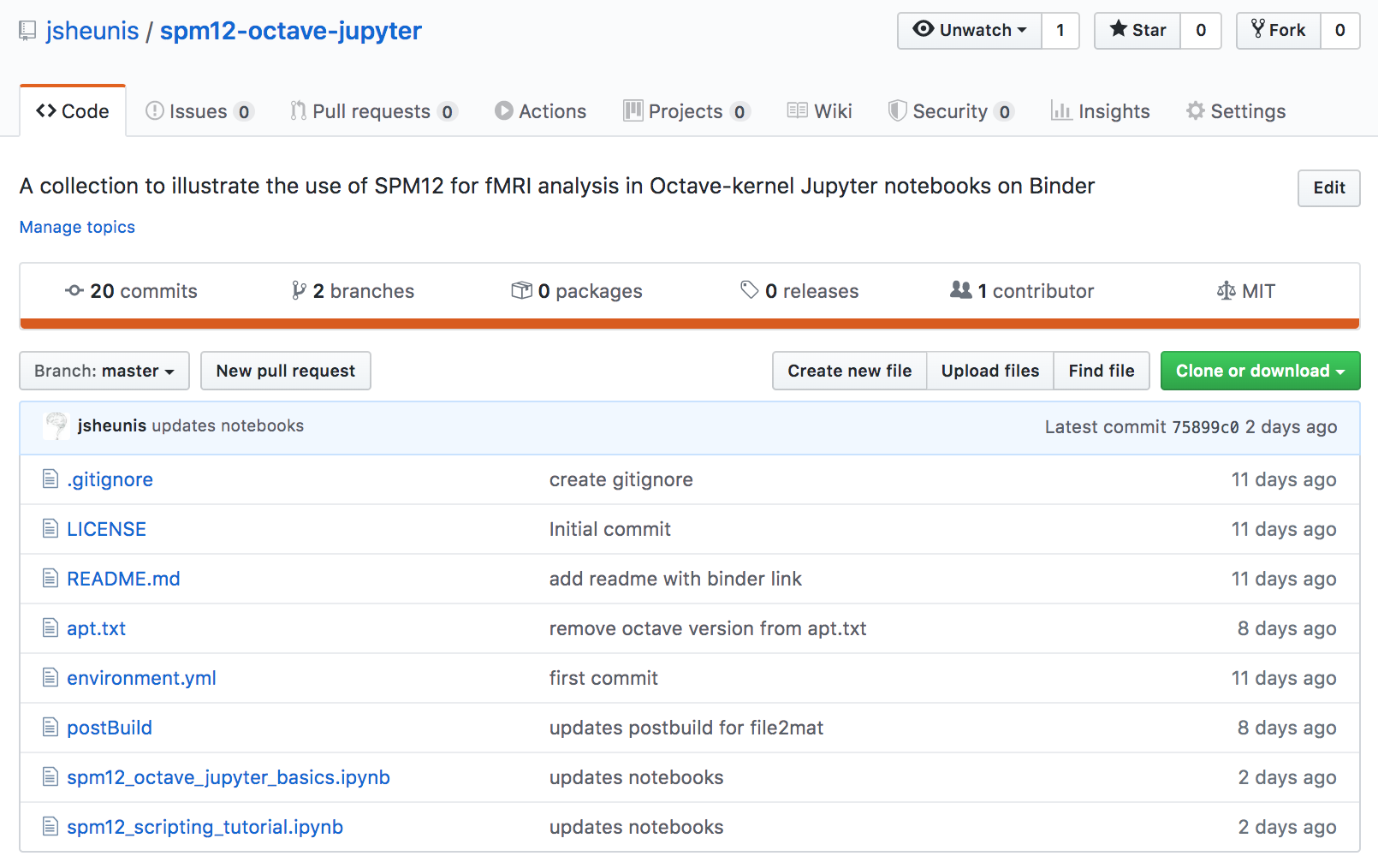 This file contains the following:

which is how the octave_kernel Python package is installed, via conda-forge.

This file contains the following:

This is a list of Debian packages that will be installed with apt-get. We specifically need this in order to install GNU Octave. We also install Octave-related packages that support its use in a Jupyter notebook, as well as curl to download processing scripts and awscli to download fMRI data from OpenNeuro.

It is technically also an option to include octave as a line in the environment.yml file, which would install it via conda-forge. However, you have to take into account which Octave versions are distributed via the different package distribution systems. Currently, at the time of writing this post, the apt.txt route installs octave 4.2.2, while conda-forge only has 4.2.1 available. See this issue for more information.

This file contains code that runs after the desired environment has been created:

This code does the following:

This is where our reproducible fMRI analysis will actually be done. In line with not having to do any actual development or installations on your own system, you can actually just include an empty .ipynb file in the repository and then do the development once your Binder environment is live. You can then download the updated notebook from your browser and just replace the original empty one with the updated one.

7 - Hand the reins over to Binder

The code repository is now Binder-ready. All that is left to do is to point Binder to the repository: 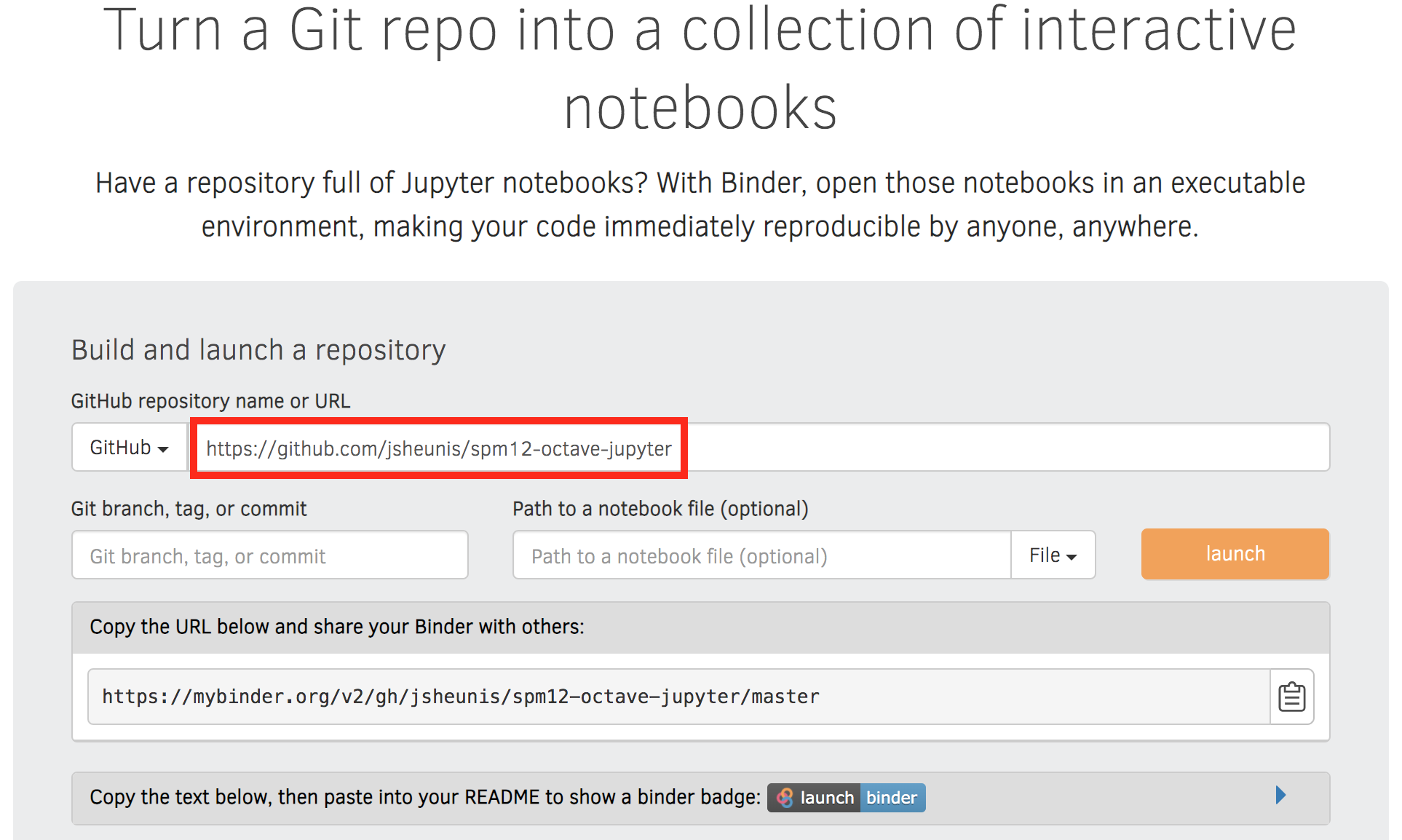 The launch process might take several minutes depending on your requirements and whether a pre-built image is already available (I’ve waited up to 15min before, but it’s mostly shorter).

Upon successful launch, you should see the following directory/file browser setup, from where you can explore the installed libraries and the Jupyter notebooks:

Currently, there are two notebooks:

As I explained before, this a minimum viable product. It achieves the main goal of having a reproducible cloud-based environment for computations using Matlab code and SPM12. But there’s room for improvement:

As mentioned in this issue and explained on the SPM12 wiki, a more recent version of Octave would be ideal. Additionally, this would negate the need for the current .mex-file workaround used in the postBuild script.

Some basic plotting functionality is demonstrated in the spm12_octave_jupyter_basics.ipynb notebook. More extensive or smarter use of the different plotting backends and plot formatting options (e.g. line magic commands) could perhaps lead to prettier and more versatile plots.

Additional work is necessary to show the output of SPM12 processes inline in the notebook. When running SPM12 scripts in your local Matlab environment, outputs from functions will often display automatically (or explicitly, if called directly) via the SPM graphical user interface. This will not be the case in the Jupyter notebook, and you might have to dig into SPM12 functions to see how these plots are created in order for you to create and display them explicitly.

Interactivity through the use of widgets is a great way to expand the reach of your work with Jupyter notebooks. A simple and applicable example is the niwidgets package that allows you to scroll through the 3 dimensions of a brian image in a notebook:

I have not yet found a way to do this easily in a notebook with an Octave kernel. I should add that I have not searched far and wide, and my knowledge about how Jupyter notebooks interact with the Octave kernel on a low level is not enough to make something jump to mind. Perhaps it is already possible (if so, please let me know!) and perhaps it needs some work, but this would be a great addition to the current framework.

Thanks for following along! If you’re interested in contributing or learning more, please feel free to reach out via the GitHub repository.